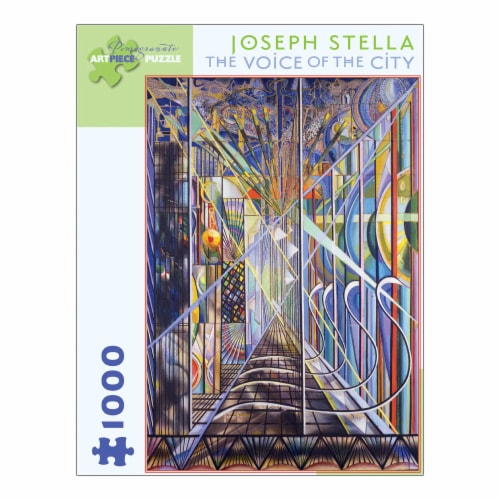 Joseph Stella's monumental painting The Voice of the City of New York Interpreted, a panoramic, five-paneled view of 1920s Manhattan, evokes the dizzying dynamism and awe-inspiring spectacle of the city. Measuring more than twenty feet long, The Voice of the City presents key Manhattan landmarks at night, starting on the west side with the Battery, then moving to the middle of the island with Broadway's Great White Way (featured on this puzzle) and the skyscrapers, and ending in the east with the Brooklyn Bridge. Below are tunnels for trains, electricity, and plumbing. Stella (1877-1946), who immigrated to New York in 1896 from a small town in southern Italy, interpreted American technology in religious terms, conveyed by the altarpiece format and deep, saturated colors that give the appearance of stained glass windows. Purchased in 1937 from Stella's Newark-based gallery, Rabin and Krueger, The Voice of the City reflects the Newark Museum's commitment, dating from its founding, to educate, inspire, and transform individuals of all ages and the local, regional, national, and international communities it serves.